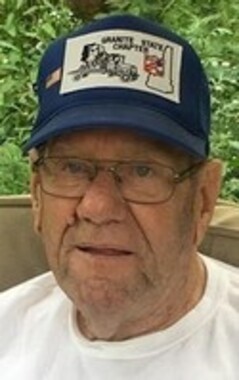 Back to Robert's story

Derry, NH - Robert O. Johnson, 87, of Derry, NH passed away peacefully at home April 10, 2019.
He was born in Campton NH, Dec. 4, 1931, son of the late Donald O. and Gladys Webster Johnson. As a boy he enjoyed hunting, fishing, exploring, and tinkering with his brothers, Donald, Harold and their father. He had fond memories of his beloved sister, Grace Hodgson Keller. They predeceased him, and no doubt welcomed him home, along with sisters-in-law, Sheila Johnson, Carol A. Smith and brothers-in-law, Robert Smith, Edward Hodgson and Fritz Keller.
In 1948 Bob met the "pretty spunky city girl" Nancy E. Smith. It was love at first sight! They married on his birthday in 1949 and enjoyed 41 years of wonderful of marriage, until her passing in 1990. Bob went on to find new love with the late Carol Ann McFarland of Chester, with whom he resided for 20 years until she passed in 2016. He had a special bond with grandson Adam McFarland and they all enjoyed wonderful adventures.
Bob was an electrician and member of IBEW local 103. He retired after 30 years and founded Bob Johnson Construction, a trucking and heavy equipment company in Sandown. He was elected as Road Agent and held that position for 15 years. Bob worked well into his 70's and enjoyed swapping stories with his friends and colleagues at the Town Shed.
Bob was also a volunteer firefighter in Sandown, and served as a police officer for many years, including several terms as Deputy and Chief. He was a member of the Sandown Lions Club, where he donated his time and skills to make the Sandown Carnival a local legend. The famous bonfire, which Bob and his friend Warren Roberts fueled with railroad ties they dug up, transported and topped with a car, was the talk of the town for decades!
He was a self-taught man with many talents; mechanic, truck driver, welder, heavy equipment operator, carpenter, photographer, artist, bottle digger, truck and train lover, and a romantic at heart.
Bob is survived by his three beautiful daughters and their families. Judi A. Johnson of Danville, N.H., with whom he enjoyed lunches and lottery tickets, Dunks and jelly donuts and his grandchildren Jennifer and Jamie Stratton of Maine. He was very fond of "ex" son in law Scott Boodakian of Derry NH, who also shared a love of mechanics. Donna Johnson and her partner Robert Fraser of Sandown, N.H., and his grandchildren, Daniel Barden and Zachary Johnson. He loved her sweet treats, artistic talent, and caring nature. He appreciated Bobs love of cars and mechanics. Beth Johnson-Crawford of Derry NH, son-in-law, William and great grandchildren Billy and Trevor with whom he lived semi independently since 2017, and with whom he shared many impromptu road trips and activities. He enjoyed Reiki, cards, miniature golf, camping, lunches out and helping Beth and Bill. He was thankful for the time to reconnect with his grandsons, William and Travis Crawford. He was very proud of his "step" granddaughter Brandie Lynn Crawford, an army veteran.
A son, Ronald, predeceased him in 2011 and was father to his grandchildren Jenny Hobby, Peggy Rose, Robert O. Johnson II and Brooke Johnson Richards with whom Bob has a special bond.
In addition, he leaves behind his beautiful sister-in-law, Patricia Johnson of Campton, NH, and many great and even great-great-grandchildren, as well as his wonderful nieces and nephews.
Following cremation, memorial calling hours will be held on Sunday, April 28, 2019 from 9 to 11 a.m. in the Peabody Funeral Homes and Crematorium, 15 Birch Street, Derry. Burial will follow in the Center Cemetery, Sandown with a reception to follow across the street at the Town Hall. In lieu of flowers, memorial contributions may be made to the Loaners Closet, c/o Community Caregivers of Greater Derry, 1B Commons Drive #10, Londonderry, NH 03053. To send a condolence or for more information, please visit www.peabodyfuneralhome.com.
Published on April 25, 2019
To plant a tree in memory of Robert O. Johnson, please visit Tribute Store.

Plant a tree in memory
of Robert

A place to share condolences and memories.
The guestbook expires on October 14, 2019.

Restore this Guestbook to share a memory or message of condolence of your own.