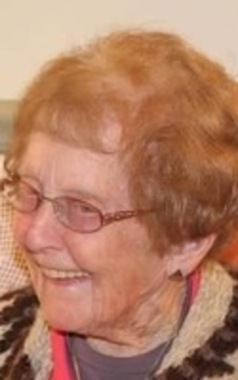 Back to Ruth's story

Newton, NH - On January 25, 2020, Ruth I Swasey of Newton (Jct.) passed away peacefully in her sleep at the age of 99 years.
Ruth was a lifelong resident of Newton. Born to Thomas and Maude Locke on November 29, 1920. She resided in Newton at Rowe's Corner where her parents had a chicken farm and later a real estate business. She met and married John F. Swasey, Jr. after he returned as a decorated Army officer from World War II. Ruth and John purchased a home in the "Junction" where they resided for seventy years and raised their two sons Charlton J Swasey and Dexter F. Swasey.
During her lifetime Ruth, a home maker, enjoyed attending school events and meetings with her husband and was very active with the PTA during her children's tenure at the Newton schools. Ruth loved to play cards and attend her grandchildren's recitals and other events. Ruth was an excellent baker and her Whoopie Pies were the best. She was a lifelong Grange member and she and John loved attending those Ham and Bean suppers. They could also be found on weekends "hitting" the local yard sales. In later years Ruth could be found sitting on her porch watching the world go by, the activity around the Memorial School, and knitting mittens for all the kids. She was the most recent recipient of the Boston Post cane for Newton, N.H., given to hold by the oldest town resident.
Family members include her sons Dexter F. Swasey and his wife Lisa of Brentwood, NH; Charlton J. Swasey and his wife Vanessa of Kingston, N.H. Five grandchildren; Nathaniel Swasey and wife Catrina of Newton, N.H.; Rachel (Swasey) Cuevas and her husband Florencio of Northwood, N.H.; Ethan J. Swasey and wife Jamie of Strafford, N.H.; Sarah R. (Swasey) Pfistner and husband Ben of Barrington, N.H.; and Joshua C. Swasey and wife Stacy of Abington, Mass. Also seven great-grandchildren, Levi, Dylan, Timothy, Leila, Grace, Eli and little boy Swasey due to arrive in March.
The family wishes to mention and thank Ruth's special caregiver Barbara Christenbery who was with her for the last seven years and became Ruth's friend and dear to her and the family.

Memorial and internment will take place in the Spring.
For more information, visit www.brewittfuneralhome.com
Published on February 6, 2020
To send flowers to the family of Ruth I. Swasey, please visit Tribute Store.

Send flowers
in memory of Ruth

A place to share condolences and memories.
The guestbook expires on May 05, 2020.